During old-fashioned physical brown-paper sessions, the sticky notes are written individually, but the real knowledge exchange only takes place once the sticky notes are put on the board. This is when participants start talking to each other, and the different viewpoints on the subject/idea are exchanged. That is the essence of such a session, exchanging views.

Our new brown-paper module focuses particularly on that important group conversation. Post-it notes are submitted via the phones, and then the facilitator selects an idea and enlarges it on the main screen. At that point, participants can vote on the idea, and the focus is on the different views participants have. What is really important and where on the canvas should such an idea be placed? The facilitator can also see what the highest and lowest votes have been and ask those people to explain their votes. The post-it note can then be positioned by the facilitator or by the person who suggested the idea, again very simply, via their phones.

QANDR's brown-paper module has major advantages over other post-it note solutions on the market. Instead of a fragmented experience in which participants are only concerned with their own post-it notes, the brown-paper module puts the conversation back at the center and gets participants talking about each other's ideas again. A second advantage is the ease of use. With other applications, the interaction is mostly via the computer, and not the phone. For less digitally skilled participants, this results in the ineffective scenario where they are primarily concerned with technically operating the interface. Instead of focusing on the central conversation - the original purpose of the session.

To use the new Brown Paper module, a facilitator of a session must also use the QANDR remote control. The Remote Control video does not yet cover this part but below you can already download a pdf manual that explains the Brown Paper module version. 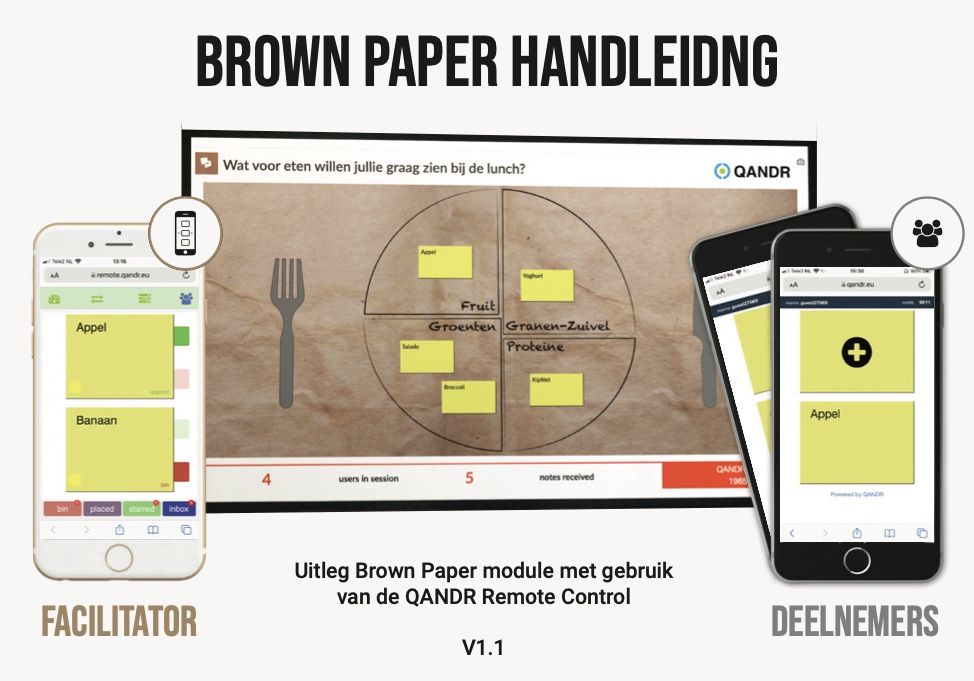 Ideal group size as there is room for each participant to explain their idea and discuss it as a group.

Still possible because of the simple structure of the module, but not everyone will be able to speak. The number of ideas will quickly become too much to handle all, in which case the selection mechanism on the remote control will come in handy.

Group is too large to discuss all ideas, our advice is to split the group into two sessions to keep the dialogue going.

Click here for a summary of all modules and here to compare them.